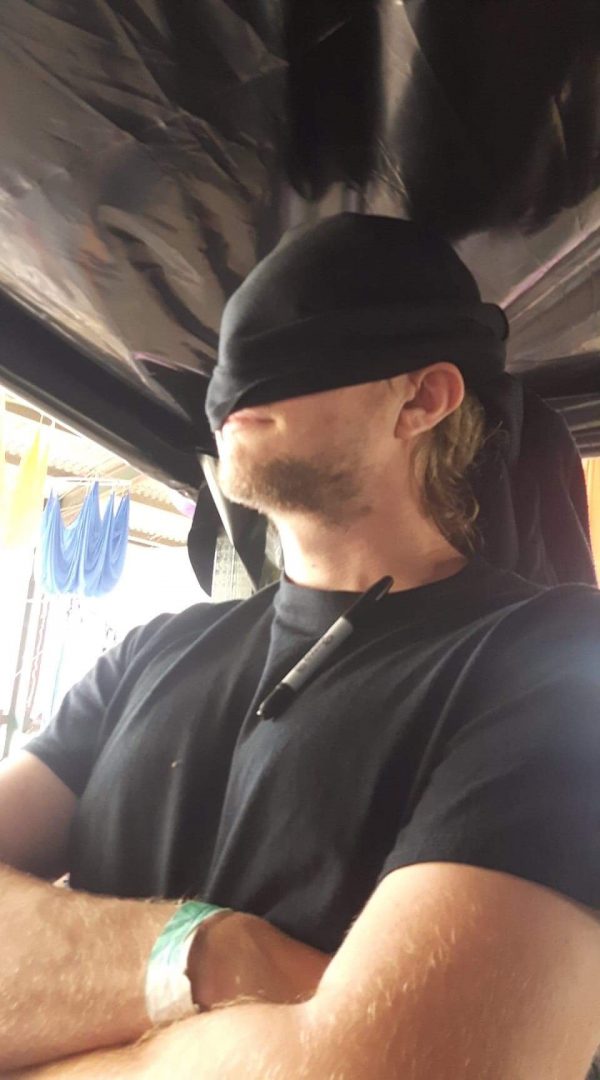 We are back from another successful Purbeck Valley Folk Festival where we provided sound crews and equipment for the two main stages (well…barns..but I’ll take a barn over a marquee any day)

Onto the weekends experiment..

Dave Hammer (pictured here..no thats not Zorro!) is a very hard working freelance engineer. He has a positive can do attitude and is always wishing to further his knowledge. Hire him..he’s great!

He tours with a Metal band in his homeland Czech Republic and he was looking to buy a new Kick drum mic (Audix D6, Beta 91, Beta 52) – the quest for the holy grail in Metal band terms.

I hold the belief that mics don’t really make that much of a difference…certainly not for live sound..and certainly not to the extent that a lot of people make fuss about. Nobody would really hear that much of a difference to the end result if you had a stage full of exclusively SM57s and SM58s! (in fact, it might even fix a few problems!) When I’m mixing FOH, I really don’t mind which microphone is chosen for which instrument, and I let the stage crew just get on with it. It wastes sooo much time on festival changeovers swapping mics, clips, all the time.

I also feel that microphone choice holds more relevance to the performer than the engineer. How the vocalist likes to work the distance from the mic for example, or if a sax player would prefer a clip-on to allow more freedom of movement compared to a mic on stand. This is usually a performer led choice, based on real world practicalities, rather than at the whim of the sound engineer.

We had a lot of technical riders in requesting kick in and kick out. Fairly common procedure these days,  (I’m not the biggest fan of two mics on one source, more on that another time, furthermore this is a Folk Festival people…not Knebworth!)

Anyway, because we had the two lines in run in, we decided to do a blind test. Kick in was a Beta 91, and to put “worst case scenario” into place, kick out, against all conventional “wisdom” we placed an SM57!

We blindfolded Dave and switched between MIC A and MIC B being careful not to give the game away as to which was which, and invoke some very troublesome confirmation bias. Something that the sound industry is plagued with…more on that later too.

The ground rule was that I was allowed to EQ each kick mic to make them sound as good as possible, to see that after a bit of quick EQing, if one mic would sound “better-TM” than the other.

Well…what can I say…Dave identified the mics the wrong way around. He preferred the sm57 OVER the Beta 91. Marginal sonic differences were noted. Nothing major. Does this make Dave a bad engineer? Far from it! He has great ears, and good number of years experience under his belt, at all levels of the industry.

How was this possible? I knew that the 91 would have slightly more click than the 57, and so I applied a gentle boost of the upper mid and HF frequencies on the SM57 to lessen the difference.  I also applied a little low end boost to the 57 so it actually overtook the low end response compared to the 91, making Dave favour the SM57. I didn’t boost by much, 3 or 4db, just enough to prove the point that you can pretty much achieve a very desirable kick drum sound with almost any mic.

Overall there was negligible difference between the two.

Why is all this chat about mics so important?

I think that as sound engineers we should strive to reach as full as understanding as possible in order to discern things of great importance, from things that are less important. We should take the time, pull things apart, try one, try the other. We do it when we have to change a cable out. It’s important to correctly identify the fault or every time a line went down, we would throw another microphone in the bin! This would be a logical fallacy.

Unless you investigate and A/B test things, you are operating on an unproven belief in your head (or marketing hype) that you simply must have an (insert favourite kick drum mic here) otherwise  you won’t get your signature kick sound!

On the other hand, I wonder what might have happened without any subwoofers in the system at all for example? I think that might have made a considerably more fundamental difference to the quality of the kick drum sound…for either microphone! And no dedicated kick drum mic is going to sort that out! Or…what about if we swapped out the kick drum?

Its all about getting your priorities in order…knowing what is and isn’t worth making a fuss about…and realising that there is a lot of general “sound knowledge” out there… “Audix D6 is the best mic on kick drums” for example…and while this sort of meme knowledge can be useful for beginners, nothing beats running your own tests, finding your own favourites, and getting closer to having a better grasp of the facts of the situation.

Otherwise you’re dangerously close to having “hi-fi head”. Repeating parrot fashion…”Midas make the best preamps, neumann make the best vocal mics, DPA are the best violin mics, and all my DI boxes simply have to be BSS or the show will spontaneously combust!”

Dig deeper, be a sound ENGINEER. You’ll thank me next time you only have 10 mins at a festival, and you spend your 10 minutes doing things that actually make a big difference to your gig, instead of chasing around swapping mics for evidently no reason at all.

Both will make a loud pleasing thump sound! We have proof!

….and if you really do want the best microphone for a kick drum…maybe the SM57 should make your shortlist!

Fond farewell to Bristol Jazz and Blues at Colston Hall